Frankfurt Or Berlin: Which To Choose For A 3 To 5 Day Stay

If you’re traveling in Europe and have a couple of days to spend in Germany, should you stay in Frankfurt or Berlin?

For most travelers, the answer is, choose Berlin. Berlin is the capital of Germany and a very large city (over 3.5 million people), while Frankfurt is an important financial center but a much smaller city with under 1M people.

Berlin has a very rich history, culture, and nightlife. If you’re in Germany for a short time, however, and depending on your tastes, you may find Frankfurt is a much-underrated city that has some really cool things to offer, albeit very different from Berlin. Let’s dive right in.

Frankfurt is easier to travel to than Berlin because it’s more centrally located in Europe, being situated in the Western part of Germany – while Berlin is out in the Eastern end close to Poland. Frankfurt is also a much more central hub within the European transport network.

The Frankfurt airport is also the biggest and best-connected airport in Germany and an important European air travel hub, which much more intercontinental flights compared to Berlin.

Many people commute to Frankfurt for their work – the city has more commuters than permanent residents.

Berlin, on the other hand, has a remarkable urban transportation system, the UBahn and SBahn (underground and street rail) that makes the whole metro area easy to access despite very large distances.

Despite efficient transportation, getting from A to B in Berlin can take a long time. In contrast, moving around in Frankfurt using public transport is generally quick due to shorter distances. Driving around in central areas is hard, though, due to the labyrinth of one-way streets.

You can Travel between Frankfurt (airport) and Berlin by train in about 4-5 hours. A good option is to get a German Rail pass, e.g. a 3-day (the minimum) second class pass for good value.

Berlin is generally considered a remarkable city with a great metropolitan and international atmosphere and a high variety of areas and feel. The city used to be split in two during the Cold War, which creates that variety. For example, there are two entirely different downtown areas, the center of West Berlin (in the Ku’damm area) and the center of East Berlin.

Each neighborhood in Berlin used to be a unique village, so each feels like a totally different place. Berlin has a unique vibe with a mix of grunge and posh. Travelers often find Berlin fascinating due to its significant history and vibrant cultural life.

Frankfurt is a much more compact city than Berlin with a small historic center (due to extensive destruction during the war). As Germany’s banking capital, Frankfort also has a small but well-defined financial quarter with impressive skyscrapers, unique in the country.

Due to its position as a banking hub and the seat of the European Central Bank, Frankfurt is often seen as a yuppie city and sometimes perceived as a bit bland. However, it also has a relatively large student population and decent nightlife in the Saschsenhausen area.

While Berlin is an ebullient and extremely diverse place, it can get very urban and gritty. Frankfurt is generally nicer and more relaxed. The people in Frankfurt also tend to have money, making for a laid back and pleasant feel.

Berlin has tons of historical sights due to its central place during and after World War II. Berlin is home to the Holocaust memorial, worth visiting, and the rests of the Berlin wall. The 18th-century Brandenburg Gate is an important sight (tough a tourist trap) being the symbol of the reunification of East and West Germany. Checkpoint Charlie is another major attraction, though most of it was re-created for tourism.

Berlin has a very rich art scene and beautiful modern architecture as embodied by the 1963 Berliner Philharmonie building. Near the Brandenburg gate is the German parliament building (Reichstag) displaying 19th-century architecture – you can easily spend half a day there.

Berlin’s Museum Island on the Spree River has the greatest concentration of museums in Europe. The area groups several great museums including the stunning Pergamon which showcases archaeological pieces from the Greek, Roman, and Islamic civilizations – including the renowned Pergamon Altar.

Some of the easiest ways to see Berlin is through a hop-on/hop-off bus tour, a walking tour, or a cycling tour with a specific theme e.g. art (graffiti is one such theme), architecture, history, food, nightlife etc. You can also take a boat trip to get a good sense of what the city was like before reunification.

Some other examples of great Berlin sights:

If you’d like to spend time In Frankfurt, chances are you won’t run out of things to do, no matter what some travelers say. Frankfurt has an interesting old town (Altstadt), reconstructed after the war, with its central Römerberg Square. In the main square is the 15th-Century town hall hosted in three traditional patrician houses, as well as the impressive Gothic Frankfurt Cathedral.

Another astonishing sight in Frankfurt is the bank district with its high skyscrapers, including the 56-storey, 200m Main Tower. You can also visit the 22-hectare Palmengarten, Germany’s largest and one of three botanical gardens in Frankfurt. The Goethe House is another major sight, a museum in the Innenstadt district dedicated to writer and politician Goethe who grew up in the house.

Frankfurt also has a landscape of great museums, second only to Berlin, lined up on and around the two banks of the Main River. The historic Städel art museum, on the south side in the Sachsenhausen district, has a major art collection with 2,700 paintings, 100,000 drawings and prints, and 600 sculptures.

Other sights include the Museum of Modern Arts (MMK), the Film Museum, and the Alte Oper concert hall and 19th opera house, north of the old town, which was destroyed and rebuilt in the 70s.

Berlin has a very rich nightlife, most of it taking place in the Mitte (middle) district. This is where most of the hip restaurants are located, but also a lot of the best places to go out. You can find the best nightlife in the Northern part (Prenzlauer Berg), the Eastern part (Friedrichshain), and south part (Kreuzberg) of Mitte. The wide range of pubs and bars in Oranienburger street is a good starting point for going out.

Prenzlauer Berg, namely Kollwitzplatz, Helmholdtplatz, and Schönhauser Allee are where the less commercial, alternative pubs are located. Kastanienallee street is a popular hangout for trendy people.

Friedrichshain is one of the most alternative areas of Berlin, with industrial wastelands repurposed into huge techno clubs and trendy pubs with wide terraces.

Berlin also always has a lot going on during the daytime, including countless restaurants and coffee shops and frequent free concerts in the street and parks. Mauerpark is a very popular and laid back food and flea market with ethnic and vegan food and frequent live performances. The Markthalle Neun food market is another nice market which houses regular food festivals.

Frankfurt is not as hip, vibrant, and alternative as Berlin, but it also has its great, underrated charm. For one thing, it has distinctive traditional food such as Green Sauce, Handkäse (strong marinated cheese and onions on bread), and Applewine (fermented bitter apple juice). You can find many places serving these specialties in the Sachsenhausen district.

Many popular pubs and clubs where the international community likes to hang out (e.g. JazzKeller, Zoom Frankfurt, Roomers Bar) are located North of the Main River in and around the old town. The cobbled streets of Sachsenhausen is another area where you’ll find many local pubs, bars, and discos. Although not the poshest area, it’s a good place to hang out and meet people.

The 300-seat English Theater in the Gallileo Skyscraper offers nice performances to a very international public and is an important piece of Frankfurt’s cultural life.

Brunch on weekends is a big thing in Frankfurt, you can have a nice and affordable meal including crepes and waffles in a café or bar of the Hauptwache, Marienplatz, or Bornheim Mitte district. In the evening, you can also have a beer at the Hauptwache café and watch Mainhattan business people go by.

Both Frankfurt and Berlin offer good shopping opportunities. In Frankfurt, the Zeil is the city’s main shopping area, one of the best-known and most popular shopping streets in Germany. While most of the grand buildings were destroyed during the war, the street is now lined with imposing department stores with impressive architecture, including the My Zeil and Galleria Kaufhof arcades. There is an ample pedestrian zone with hundreds of shops between the main Hauptwache Plaza and Konstablerwache Plaza.

Berlin has tons of shopping, including high-end boutiques along Kurfürstendamm, department stores on bustling Friedrichstraße, and vintage shops in bohemian Kreuzberg.

In Berlin, unlike most other capitals, the city center is not necessarily the best place to stay, many travelers like to stay in the more lively nearby areas such as Prenzlauer Berg (flower and tree-lined) or Kreuzberg (a bit grungier) where restaurants, bars, partying, and parks are abundant. From there, you can easily take public transport to every other part of Berlin. The Hotel NH Berlin Mitte is often mentioned as a good choice.

If you do prefer to stay in the center, though, the Gendarmenmarkt or Museum Island areas are good options as they are within walking distance of the major sights.

Anywhere around Friedrichstraße will also allow you to easily walk to the main sights. The Melia Berlin near the Spree River is only a short walk to trains, museums, Brandenburg Gate, etc. City Hostels is a good budget option as well. Alternatively, self-catering accommodations from centrally-located Mondrian Apartments or Damn Apartments are popular options.

Some travelers like to stay near Savignyplatz, a central, well-connected historic area with many restaurants, design shops, and cafés. Hotelodeo is an example of a recommended place. From there you can easily take public transport to Postdamer Platz, Alexanderplatz, or Hackescher Markt.

The Leonardo Royal Hotel Berlin in Alexanderplatz has a great location for walking everywhere. Down the street is the more affordable One80º hostel which has a great social atmosphere and free walking tours every day.

Unter den Linden is a popular location for a more traditional environment. Potsdamer Platz, in contrast, is a more modern and active area of Berlin to stay in.

Frankfurt is quite expensive but you can find a wide variety of places to stay. You can choose to stay in the Zentrum-Altstadt “old” city center so as to be within walking distance of the main square, rebuilt medieval buildings, and landmarks.

A more affordable option is to stay in the Bahnhofsviertel district West of the city center, a revamped and lively area next to the main train station (and Frankfurt’s red light district).

Sachsenhausen, across the Main River from the old center, is a good neighborhood to stay in for nightlife. Its a creative and bohemian neighborhood with narrow streets and numerous restaurants, bars and clubs. Another option is the Gutleutviertel riverfront district, one of the most recently revamped neighborhoods in Frankfurt.

Bornheim is a nice and quiet alternative East of the city center, with cobblestone, tree-lined streets and alley paths. The Frankfurt area is close to the Zoo and botanical gardens and has a nice historic feel as well as trendy shops. 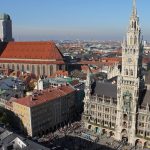 Munich Or Hamburg: Which City Should You Visit?