Oslo is an attractive city known for its green spaces, maritime museums, and attractions. Helsinki has fewer tourist sights and is less exciting than Oslo but more picturesque. Travelers love the nature North of Helsinki and the memorable midnight sun experience in the summer.

While Oslo is often considered a better option for a first trip to Scandinavia, Helsinki is still very much worth a visit. Helsinki is also a bit more affordable than Oslo, although it’s still expensive for most foreign travelers.

Many trains and ferries connect Helsinki and Oslo to surrounding places.

Travel passes allow you to travel the area of Helsinki and Oslo. In Finland, there’s the Scandanavian pass. Another great pass is ScanRail; it’s often 100% or 50% off from Stockholm to Helsinki. The ScanRail pass is good on all trains and key ferries.

Travelers often recommend spending two days in Helsinki and then flying up to Oslo for a couple more days. You can then take the train to Bergen followed by the steam up the Norwegian West coast

Many tourists include Copenhagen, Stockholm, and Bergen in their itineraries. Copenhagen is a good city to start off. You can catch a flight to Bergen to explore the region from Copenhagen. Onwards, a train to Oslo.

If you are in Oslo, you can take the Bergen Railway. It’s one of Europe’s most scenic railways. Alternatively, take a flight or train to Stockholm, and then a cruise to Helsinki is a great trip to take.

From Copenhagen, travelers recommend taking a train to Gothenburg as a stopover. Take the train to Oslo, then to Stockholm, ending with an overnight  ferry to Helsinki. It’s a fantastic trip because you can see the stunning rocky archipelago and the Scandinavian countryside.

If you are set on going to Stockholm after Copenhagen, fly to Helsinki instead of Oslo.

From Helsinki, you can take the Silja Ferry overnight to Stockholm. Before taking a train to Oslo, you can visit Stockholm for the day.

Extroverts may prefer Oslo because it has more attractions, although the architecture is a mixture of old, new, and 70s-80s style buildings. If you’re more of an introvert, on the other hand, the beautiful city of Helsinki is a gem in Finland.

If traveling in the winter, there will be a lot of darkness and rain in both cities. Summertime is generally a brighter, happier trip.

Helsinki has a mixture of Russian and Nordic styles, with many Russian speakers. Although it’s not considered the most trendy Nordic city, it’s very walkable with a relaxed atmosphere and lively street culture with great food.

The architecture in Helsinki is unique. The suburbs are a mix of 1960s Swedish architecture and 1970s DDR- style architecture, including post-war architecture. You’ll see modern Nordic art and design, and there’s a stunning St. Petersburg-like center.

In the summer, Helsinki has many beaches and little small islands to swim and sunbathe. Hietsu, a sandy beach, is very close to the town center.

The city still has an atmosphere when it’s cold, but from October on it is freezing cold and hence a bit less lively.

In August is the Helsinki Festival. The city has hundreds of music, art, and fashion shops happening every day, all over town. There are also street cafes for food, and good picnics and islands to sit outside.

The people of Helsinki do not easily talk to strangers. They prefer sincere conversations over small chat, and can become great dependable friends, but you’ll have to break through the barrier first.

Although some feel Oslo is not as picturesque as Helsinki, Oslo has many nice districts with a mix of new and old.

Its climate is slightly warmer during the winter, and tourists can walk in the beautiful surrounding nature.

The main street runs from the central station to the place. This street has many upmarket shops and trendy cafes. The center is very trendy and fashionable in a glass and iron style.

The city is rich in culture. Sights to see in Helsinki include the Parliament House and the Sibelius Monument.

You can visit the underground church, the red-brick Uspenski Cathedral which overlooks a harbor, and the Rock Church to understand the religious history. Many travelers find the Rock Church and the Russian-Esque churches truly spectacular.

Helsinki has a plethora of outdoor activities. Suomenlinna is an island worth visiting, the birch-tree studded forest is gorgeous. If you want to see the countryside, you’ll need to take a tour or rent a car.

Oslo has some great art museums, many of which are on the Bygdoy peninsula. You can typically visit them in a day. The Munch Museum holds Munch’s famous ‘Scream’ painting.

The “Troldhaugen” museum just outside Bergen is worth a visit. The trip from Oslo to Bergen is also enjoyable.

The Kon Tiki museum and Viking Ships museum has Viking ships dating back to the 9th century.  The Opera House has impressive modern architecture.

The Open Air Nordic Museum is a park with ancient traditional buildings, shops, factories. The museum gives tourists an experience of what Oslo was like centuries ago.. The open-air naval museum showcases real ships and a submarine. It closes after summer, however..

Frogner Park is quite unimaginable. It covers 45 hectares and holds the world’s largest sculpture park made by a single artist.

In the Harbour area, visitors can stroll through cafes, restaurants, and shops. It’s considered one of the most attractive places in Oslo but can be pretty expensive.

If you like adventure, the Holmenkolbakken is a ski-jumping hill where you’ll see gorgeous views of the fjord and also visit the ski museum.

Travelers recommend budgeting between 10 to 30 euros per person for a budget meal. Beer costs “only” 7.50 euro at a pub or restaurant.

Helsinki is known for its fish. You can buy about 200 different types of pickled herring at the boat markets. For only 10 euro you’ll get a whole tray of fried small white fish.

On Sunday, the town is quiet, and many places close. Tourists have limited options to find food and drinks in the morning and evening.

Oslo has a more developed craft beer scene compared toHelsinki. The coffee scene is often considered one of the best in Scandinavia. Tim Wendelboe and Solberg & Hanses are based in Oslo.

Oslo accommodation is more expensive than Helsinki. For the same budget, in Oslo you will find a hotel room near the train station with a bathroom down the hall, vs in Helsinki, a nicer hotel with a private bathroom and a better location.

Helsinki has a plethora of options for hotels, from boutique to budget. If you have a decent budget, Hotel Arthur is a charming hotel in the city center, Kluuvi. It’s close to tourist attractions and shopping.

The Omena Hotel is budget-friendly but still very popular for travelers on a tighter budget. It’s a functional hotel so expect simplicity and cleanliness. It’s a great choice if you want to stay in an area full of nightlife.

Oslo has many different neighborhoods with great places to stay to explore the city. In the center of downtown Oslo is the Sentrum neighborhood. It’s a popular place for lodging because it’s close to restaurants, shops, and central station.

The Thief is a well-known hotel located in Tjuvholmen, a very popular location. It’s a luxury boutique hotel on the waterfront. Each room has a private balcony, and there’s a spa in the hotel with many services.

In Frogner, Frogner House Apartments is a popular choice for accommodation. It has a self-catered kitchen, so you can choose to make food yourself or be served a continental breakfast downstairs.

There are many fantastic day trips in and around Oslo. Some traveler feelday trips from Helsinki are not as exciting as around Oslo as Helsinki is mostly surrounded with forest.

From Helsinki, you can take a trip for a day or two to the fascinating country of Estonia. Take a 2-hour ferry to the Capital, Tallinn, a charming and compact city, easy to travel around.

If you have more time, you could take a 4-day train tour to St Petersburg.

From Oslo, there are plenty of unique activities. For a short day trip, take the subway to hike around Sognsvaan lake, only a 15-minute subway ride.

If you have a day or two, you can travel to Bergen. It’s a stunning city with old features such as ancient wooden edifices.

While you’re in the area, you can take the fantastic Norway in a Nutshell boat ride along one of Norway’s largest and most beautiful fjords.

Oslo has famous ski runs accessible from the city center by public transportation. 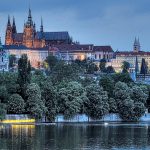 Copenhagen Or Prague: Which Is Better For 3 or 4 Days?