Vienna Or Prague: Which Is Better For A Few Days?

If you only have a few days to spend in Central Europe, you may have a hard time deciding whether to spend them in Vienna or Prague. The choice is a tough one since these two capitals, respectively of Austria and Czechia, are definitely two of the most beautiful European cities to visit. The two have roughly comparable sizes (Prague population ~1.3M vs Vienna ~1.9M).

Which of Vienna or Prague should you choose? Vienna is grand, elegant, formal, with grandiose imperial palaces, world-class museums, and renowned classical music venues. Prague, on the other hand, has gorgeous architecture from both medieval and 19th-century eras. Prague’s center is compact, walkable, atmospheric, and feels like an outdoor museum.

Let’s look briefly at what travelers typically say when comparing the two cities for a short stay.

Vienna or Prague: what travelers say

Both the Vienna and Prague airports are under 20 km from the respective city centers, and are easily accessible by public bus, airport express bus, taxi, or in the case of Vienna, by train.

The best way to travel between Vienna and Prague is by train. Fast Railjet trains take about 4 hours and run every couple of hours, connecting the two city centers. Fares start around 20€ in second class. There’s a restaurant car and free Wifi. Tickets can be booked with either the Austrian or Czech railways.

If train fares are expensive for your travel period, the bus is also a valid alternative – check out Regiojet or Flixbus.

Most travelers agree that Prague is gorgeous with its medieval architecture and numerous spires. It is hard to walk 100 meters without seeing something astonishing. The old town has a very medieval look (if you omit the traffic). Vienna’s architecture is more classic and formal.

First-time visitors tend to walk around Prague for a few days, feeling hypnotized by the vibe so different from other big cities. Prague is compact and very walkable, cozier and easier to meander the streets than Vienna. Vienna has more of a big city feel, though getting around is easy thanks to the great tram system.

Prague’s city center is increasingly affected by mass tourism most of the year. Some travelers compare Prague’s center to a sort of Disneyland with primarily tourist-only restaurants and beer halls, souvenir shops, and hotels. Few locals hang around the area.

Although the Old Town Square, Charles Bridge, and the castle complex can get very crowded, you can step away and walk around Mala Strana or Vinohrady without being bothered at all by tourists. Travelers feel you don’t need to visit all the “rat race tourist” areas to get the vibe of the city.

Vienna’s inner city feels less tourist-invaded. Real Austrians live in the heart of the city, 200-year old shops continue to operate there, and the traditional coffee shops and restaurants cater to the locals as well as the tourists.

For some travelers, however, Vienna’s carefully-rebuilt city center is just too picture-perfect, stately, and manicured for authenticity.

In contrast, outside the core tourist area, Prague tends to feel much more authentic. The fact the city was not destroyed during the war also gives it has an almost shabby charm, with all the buildings being original. Travelers generally find The Czechs quite friendly and warm.

In Vienna, the tourist sights are quite stunning and concentrated around the inner ring, a relatively small and walkable area. The main attractions include the imperial palaces from the Austro-Hungarian era, the gothic cathedral and churches, the museums, and the gardens.

The Schonbrunn Palace, the Hofburg Palace and its jewel-rich Treasury, and the Belvedere Palace with its gardens, are prime historical landmarks with massive and elegant architecture.

The 12th-century Gothic and Romanesque St Stephens Cathedral is Vienna’s most visited monument. The Parliament building, City Hall (Rathaus), the University of Vienna, the Neo-Gothic Votiv Church and museum, the Volks Gardens, the Burg Theater, are also major sights.

Vienna is also great for music concerts, operetta and operas, namely at the majestic Opera house. The city also has magnificent gardens to visit. The Kunsthistorisches Museum, which hosts the impressive Habsburg art collection, is one of the world-class museums, many of which in the Baroque MuseumQuartier area.

The classic Spanish Riding School inside the Hofburg Palace has exhibits showcasing the world-famous Lipizzaner horses.

Prague may not have as impressive individual landmarks as Vienna, but travelers are typically amazed by the city’s spectacular setting and views – e.g. looking at the castle across the river at the west bank surrounded by beautiful green hills.

Sights like the Jewish Quarter, the Castle, St Nicholas Church, Charles Bridge, etc offer a unique experience as well. Some visitors may find the old castle a bit barebones but its architecture and views are still impressive.

Likewise, the views when standing along the Vlatva river looking out towards the Charles Bridge and the Gothic-style St Vitus cathedral are quite unique.

Unlike Vienna, the most valuable monuments in Prague are scattered around the city. These include:

With regards to cultural events, in Prague, it’s also a lot cheaper and easier than Vienna to get affordable tickets for the theater, opera, concerts, etc.

In general, travelers feel Vienna and Prague offer similar quality for food options, though Prague is much less expensive for dining.

Vienna has more elegant historic cafés/coffeehouses, such as Demel, a beautiful 19th-century salon with a pleasant terrace and reputed cream cakes, scones, and strudels. Prague, however, also has some great cafés, such as Café Louvre and Café Savoy.

Both Vienna and Prague have reputable fine restaurants. Vienna is well-known for its wine from the wine country West (along the Danube)and South/Southeast of the city. Both the red and white wines are a great buy and can be tested e.g. in the popular Grinzing Heurigen taverns.

Vienna’s largest concentration of restaurants and pubs is in the First District inside the ring (Innere Stadt), also the most expensive. The area known as the “Vienna Bermuda Triangle” around Ruprechtskirche near the Schwedenplatz offers some of the best nightlife, though some travelers feel it’s a bit overrated.

Prague has many places to lounge in with unique architecture and atmosphere which sets them apart from other European cities. In Vinohrady, you can find great restaurants where both locals and visitors can have Czech or international food, or just a drink while listening to lounge music.

In the area around the Old Town, behind the Tyn Church are some quaint and romantic places e.g. Bar & Books. For more modern, fashionable places, you can go to the Wenceslas Square area e.g. Restaurant Como, a cool place which serves Czech, Mediterranean, and sushi food.

Prague is famous for its rich and diverse nightlife. The Old Town Square area (Praha 1) has countless bars, pubs, and clubs. Nearby Wenceslas Square (new town) also has some very cool bars to hang out in. The Zizkov district has among the highest concentration of bars in Europe, primarily alternative places.

Near the Charles Bridge is Karlovy Lazne, one of the biggest clubs in Europe with 4 levels and fantastic views. Other hip clubs include the Roxy, the Vertigo, and the Lavka.

Prague has a very ample choice of hotels. Travelers often recommend looking for accommodation in the Mala Strana neighborhood, the area just West of the Charles Bridge and under the castle, with its small streets and alleys, the beautiful Letna Park, and the trails of Petrin Hill.

Near Wenceslas Square, the K+K Fenix is often mentioned for its great location within walking distance to most places. Travelers also recommend the Iron Gate Hotel and Suites, a nice hotel in a 14th-century building located a close walk from the Old Town Square.

Backpackers repeatedly praise Hostel One Home as one of the best places to stay for solo travelers, close to both the Old Town and to the train station. On the higher end, the Marriott Hotel is quite nice and located only a couple of blocks from the old town.

In Vienna, besides the big 5-star hotels like the Intercontinental or the Ritz, travelers recommend the Grand Hotel Wien which offers a great location and excellent service, and the Konig Von Ungarn, a pleasant early 20th-century place in a small street behind the cathedral.

Hotel Austria has often mentioned, good breakfast and friendly staff, convenient location for easy access to the inner ring. The Kaiserin Elisabeth is a boutique hotel with old-style Viennese elegance near Stephansdom.

In the Spitterlberg area, another historic neighborhood with a lively nightlife, travelers like the 25hours Hotel, the K&K Maria Theresia, Hotel Altstadt Vienna, and Hotel ViennArt am Museumsquartier. All are within walking distance of MariahilferStr. Vienna’s main shopping avenue, the city center, the Naschmarkt market, and two subway lines.

From Prague, you can easily take day trips to Tabor or Kutna Hora, two historic cities about an hour from Prague by train. You can also explore charming Czech villages located between Prague and Vienna such as Jihlava, Telc, Trebic, and Znojmo.

From Vienna, you can take a train to go visit the wonderful Melk Abbey. You can then continue through the Wachau Valley to Krem. You can mix train and boat for a great day trip.

Vienna is also only an hour away by train from Bratislava, the capital of Slovakia with its 18th-century pedestrian old town, its animated cafes and bars, and its beautiful castle overlooking the Danube. 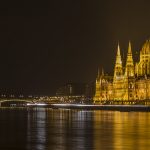 Budapest Or Vienna: Which To Choose For 3-4 Days? 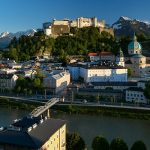 Vienna Or Salzburg: Which Austrian City Should You Stay In?