Budapest Or Vienna: Which To Choose For 3-4 Days?

Choosing between Budapest or Vienna for a short stay is not an easy task. These two cities, both located on the Danube river, are the respective capitals of Austria and Hungary. Both have impressive historical and cultural sights and a common past, each offers a very different experience to the visitor.

Vienna has the magnificence of a former Austro-Hungarian empire capital, while Budapest is a former Soviet state with a very rich history as well and buildings dating back to the 13th century. Vienna is wealthy and organized for tourism, whereas Budapest offers a more authentic immersion into its local lifestyle and culture.

Budapest Or Vienna: what travelers say

Here are some highlights of how travelers generally compare Budapest and Vienna:

You can easily travel between Vienna and Budapest by train, a 2.5 to 3 hours ride – taking day trips from one to the other is quite frequent. The taxi ride e.g. from St. Stephen’s (tourist district) to the Westbahnhof train station in Vienna takes about 10 minutes.

Budapest is a great city to explore on foot or by subway/bus/tram. There are pleasant tram routes along either river bank which can take you to the most popular hangouts, all fairly close to each other.

In Vienna, exploring the many grand castles and numerous museums and galleries may require more travel time in public transport compared to Budapest.

Budapest has a special vibe to it. Its architecture is beautiful and more diverse and unusual compared to Vienna and other classical European cities. It has gorgeous areas like the tree-lined Andrassy Utca and the green Buda Hills. The best way to enjoy Budapest is to walk around and experience the atmosphere and street life.

Budapest has an exotic feel to it, due to its history behind the Soviet wall and to long-lasting the Ottoman rule over the city.

Vienna’s First District is relatively flat and concentrated and as a result, many of the city sights can be seen in a short time by going around the small area. Vienna has a nice mix of Imperial past and post-war history, providing a rich experience for visitors.

In contrast to Vienna, travelers tend to quickly feel immersed in the Budapest culture. Yet in Budapest, few people speak English outside the main tourist areas (Vaci street and the Castle area), whereas most locals in Vienna do.

Budapest is affordable and can be fun, but requires a bit of research and exploration. Vienna is much pricier but for the time-constrained traveler, it’s a sure thing

When attending a show or concert in Budapest, the public around you is primarily Hungarian, while in Vienna you’ll typically be surrounded by many tourists. Performances generally tend to be more sophisticated in Vienna, however.

Weatherwise, the best time of year to visit both Budapest and Vienna is late September/early October.

Vienna is characterized by its classic architecture, with many grand buildings with columns and ornate carvings. Budapest also has a lot of multi-story buildings built in the 1890s, but also many buildings from the Art Deco style (1920s).

To many travelers, Vienna’s homogeneous classical architecture gives it a majestic but somewhat monotonous feel. For example, some travelers prefer Budapest’s Opera to Vienna’s main hall because it’s more “fun”, although perhaps not as grandiose.

Budapest is also unique for its scenery along the Danube river. The buildings and avenues have a grandeur that rivals great cities like Paris. The city has an astonishing mix of styles, including very creative designs from the empire years as well as Soviet-era leftovers.

Budapest’s old center is also more scenic than Vienna’s as the river divides it in two. The castle in the Buda side – historically there were 2 cities, Buda and Pest – is on a hill which results in breathtaking views across the Pest side, with the Chain Bridge and Parliament building lit up at night. For many travelers, the view is the best thing about Budapest.

Unlike Vienna, Budapest doesn’t have that much of a tourist district. Rather, the sights are spread out and well integrated into the city. Starting from the Keleti train station, you can take a one-top subway ride, then a tram running along a beautiful street, then onto the Andrassy ut which has a flavor of France’s Champs-Elysées, all the way to the river and the Buda side.

Another great itinerary is to ride the tram up one side of the river and down the other, walking across the Liberty Bridge and the Chain Bridge (the first permanent bridge linking Buda and Pest) from one side to the other. The 19th-century Citadella fortress on Gellert Hill is also worth the trip.

The Budapest Parliament building, Europe’s second-largest after London, is an impressive sight. Matthias Church and St Stephen’s Church are worth a visit. Fisherman’s Bastion is one of Budapest’s most popular sights located in the Buda Castle, a neo-romanesque building offering a stunning panorama over the city.

The 10th and 11th-century Saint Stephen Basilica and Matthias Church are also key highlight sights in Budapest. The Dohany Synagogue‘s Holocaust Memorial courtyard and the Gestopho Museum (House of Terror) are moving testimonies of WWII horrors.

The Museum of Fine Arts on the Heroes’ square is probably the best art gallery in Hungary. The small galleries in Falk Miksa street near the Parliament also has many small galleries worth a visit. The Hungarian National Gallery also offers different lesser-known perspectives.

One of Budapest’s unique attractions is its historic mineral baths and waters, such as Szechenyi or Gellért Baths – travelers who spend a few hours there really enjoy it. On a different note, the Palace of Arts (www.mupa.hu) offers great concerts.

Vienna is known for its imperial palaces. The Schoenbrunn Palace is the country’s most important architectural monument – and most travelers’ favorite. This 16th-century Rococo-style summer residence of the Habsburg rulers has nearly 1500 rooms and typically takes most of a day to visit.

Vienna has great museums, many of which in the Museums Quarter district. Noteworthy museums include the Belvedere (in the Upper Palace) and the Kunsthistoriches Museum.

The Ring Road around the Innere Stadt area has elegant 18th-century buildings including the Vienna Opera house, the Hofburg Imperial Palace, which hosts the Sisi Museum, and the Gothic Saint Stephen’s Cathedral.

The Natural History Museum next to the Hofburg Palace and the Museum of Art History are well worth a visit. The Parliament building, City Hall (Rathaus), the University of Vienna, the Votiv Church, the Volks Gardens, the Burg Theater, are all stunning architectural pieces.

St Charles Square and Church with the two obelisks in front are also very popular tourist sights. The Spanish Riding School inside the Hofburg Palace has exhibits showcasing the world-famous Lipizzaner horses.

Vienna, however, is renowned for its elegant historic cafés and coffeehouses. Vienna is also known for its fine wines, while Budapest is reputed for its craft beer – though it also has nice and affordable sweet wines like the Tokaji.

In Budapest, the Klassz Restaurant (and wine shop) on Andrássy Avenue is an elegant hangout with a spacious terrace. If gets too crowded, the nearby Menza on Liszt Ferenc Square is a valid alternative.

Ruszwurm is a reputed 200-year old coffee house in Budapest, the city’s oldest. Though very small in size, it’s said to have been one of Empress Sisi’s favorite hangouts.

In Vienna, the Donaukanal neighborhood is a club hotspot (e.g. Flex), and the Prater and Praterster areas have some up-and-coming hangouts such as Fluc Café and Wanne.

In Margareten on the edge of the city’s historic center ring, the 16th Naschmarkt Pedestrian Market Street is a good place to hang out and try the dozens of food and vintage stalls and restaurants.

Vienna is generally quieter at night and on Sundays, with most places closing very early, including the market and shopping streets. Budapest, on the other hand, is a lively city that doesn’t close until late. It has active nightlife in areas such as the Jewish quarter, the 5th, 6th and 7th districts, where pubs and clubs stay open late at night.

Dining and lodging are generally much more expensive in Vienna than in Budapest. Also, in either city, when choosing budget accommodation in the summer, you may not have air conditioning in your room.

In Vienna, travelers often recommend the Grand Hotel Wien for its great location and excellent service. The Konig Von Ungarn (KVU) is also a pleasant hotel in a small street behind the cathedral.

The Intercontinental is a nice 5-star hotel, though more attractive inside than outside. Some travelers feel it needs renovation. The Ritz, around the corner, is considered to offer better service.

Hotel Austria is another frequent recommendation. Not as luxurious as the Ritz, it is pleasant with good breakfasts and friendly staff, and is conveniently located for easy access to all places within the “ring”.

Travelers also like the Kaiserin Elisabeth, a boutique hotel with old-style Viennese elegance near the Stephansdom.

In the Spitterlberg area, another historic neighborhood with a lively nightlife, the 25hours Hotel, K&K Maria Theresia, Hotel Altstadt Vienna, and Hotel ViennArt am Museumsquartier are also good options. The area is within walking distance of the inner ring, MariahilferStr. (Vienna’s main shopping avenue), the Naschmarkt, and two subway lines.

In Budapest, the K&K Opera is often mentioned by travelers. While it’s not as luxurious as others, it offers an ideal location. There are also other decent hotels with good reviews near the K&K.

The Gerloczy is also a decent option, a nice small boutique hotel very centrally located and with a very good restaurant.

For luxury hotels, travelers often recommend include the beautiful Corinthia or the Boscolo – the latter has great history and hosts the New York Place Café, though its location is not the best in Budapest.

The Four Seasons in Budapest is award-winning but also could have a better location. The 5-star Ritz Carlton, on the other hand, is very well situated. The Marriott offers romantic nights with stunning views on the river and close proximity to the tourist area.

The Gellert Hotel, located in a gorgeous historic building across Liberty Bridge, is a renowned place known for its thermal baths and stunning views over Gellert Hill. Many travelers, however, find it disappointing.

Travelers often recommend the area around the Andrassy ut. In that area, you can also find nice apartments with rooftop patios (expensive however).

In Vienna, you can explore nice neighborhoods outside of the inner ring such as Margareten and Mariahilf, which offer more affordable and varied restaurants.

You can take a train or hydrofoil ride (on the Danube) to Bratislava, a charming historical town in neighboring Slovakia with mostly pedestrian streets – you can easily spend a day there.

Other day trips from Vienna include Salzburg and Melk (1.5-2 hours from Vienna), both charming small cities. The Melk Abbey is worth a visit. Near Melk, Wachau Valley is a wine-growing area in the Danube countryside with medieval villages to visit, river cruises, and scenic bike paths. Nearby Krems is is a UNESCO world heritage site

From Budapest, a nice day trip is to visit Hollókő, another UNESCO site village worth a visit. Also go see Tihany, a charming village North of Lake Balaton. 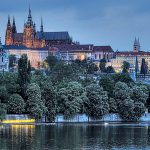 Vienna Or Prague: Which Is Better For A Few Days?