Tarifa Or Algeciras To Tangier: Where To Cross To Africa?

If you’re looking to visit Morocco from Spain, you may be wondering whether you should cross the Strait of Gibraltar by taking a ferry from Tarifa to Tangier city or from Algeciras to Tangier Med. In this post, I answer some common questions, including:

Why take the boat from Spain to Morocco

Many travelers choose to take the ferry from Tarifa or Algeciras to Tangier as opposed to flying, and here are some good reasons for this choice:

Use this tool to search for look up fares between either Tarifa or Algeciras and Tangier:

Differences between the two routes

Let’s briefly talk about the endpoints of each of the two routes, Tarifa-Tangier and Algeciras-Tangier Med, and the difference between them.

Tarifa is a small town at the very southernmost tip of Spain. It’s a nice touristy town which boasts a small historical area with narrow pedestrian streets, impressive fortified walls, and a well-preserved 9th-century castle. The castle, town hall square, and southern part of the old town offer spectacular views to the sea, the Strait of Gibraltar, and the Africa coastline.

Tarifa is famous for its strong and constant winds and is a windsurfer’s and kitesurfer’s paradise. In the summer months, the town bursts with animation, watersports events, and nightlife in the old town’s countless small pubs and restaurants.

Tarifa’s small port is located right at the end of the main avenue that coasts down along the old town’s main square. The port is where the fast ferries from a couple of companies (see below) depart from to Tangier.

Algeciras is a larger city than Tarifa (about 120.000 residents vs under 20.000) located about 25 km from Tarifa. Algeciras is an industrial city with a large commercial port and a major oil refinery outside the city. Although Algeciras is not touristy, it does have a pleasant pedestrian area around the Plaza Alta square, a small walk uphill from the waterfront and the port.

Driving into the port of Algeciras to reach the ferry terminal to Tangier Med is easy as you don’t need to drive through the city to get there, there are signs that guide you straight to the harbor as you reach the city area. The port of Algeciras is much larger than Tarifa with hundreds of trucks crossing over to Africa daily. Thus, it has much more capacity and can better handle heavy car traffic, namely during summer holidays.

Tangier is a large Moroccan city (close to 1M inhabitants) located on the southside of Strait of Gilbraltar, across from Spain. Ferries from Tarifa arrive in the port of Tangier which is situated in the middle of the city on the waterfront.

Tangier Med, on the other hand, is a very large commercial and industrial Moroccan port built in recent years (and still being expanded) to attract international shipping business and compete with the Algeciras port across the Strait. Tangier Med is located about 50km (33 miles) East of Tangier city, and right across from Tarifa – you can see Tangier Med from the Tarifa old town. The ferries from Algeciras arrive in Tangier Med.

Like Algeciras vs Tarifa, Tangier Med and its large ferries have much better capacity and infrastructure than Tangier Port for handling massive amounts of trucks and tourist cars.

The distance between Tarifa and Tangier city port is about 15 km (9 miles). The ferries covering this route are mostly smaller high-speed catamarans which take about 35 minutes for the trip. The whole journey, however, takes longer due to waiting before and after the actual boat crossing.

The sea distance between Tangier Med and Algeciras is longer at around 30 km. The ferry crossing takes about 1.5 hours as the ships between these endpoints are larger and slower commercial ferries.

Travelers on either the Tarifa-Tangier or Algeciras-Tangier Med route often complain about the boats always leaving late without any clear reason. It’s important to understand, however, that ferries commonly wait to fill up as much as possible before taking off. As a result, the 11:00 ferry will typically leave at 12:00 or 13:30, sometimes even later. In the low season, some boats even get canceled due to insufficient traffic. So this is something you should be aware of.

As mentioned, there are significant delays around the actual crossing, particularly in the summer months when traffic is high. Boarding and arrival operations can take as long as an hour each, although delays vary with route and company.

Ferry companies and prices for Tarifa or Algeciras to Tangier

Only two ferry companies, FRS and Intershipping, operate the Tarifa-Tangier city crossing. These same 2 companies also do the Algeciras-Tangier Med route, as well as 3 other companies: Balearia, AML, and Transmediterranea.

The pricing situation is quite complex, as ticket prices vary based on the route you choose, the company, and most of all, the current demand, which is tightly related to the season and time of year. Here are examples of pricing:

Here are some important considerations to be aware of though:

The answer to this question varies depending on time of year and your travel goals.

In the low season, the Algeciras-Tangier Med route sometimes has promotions when traffic is low – as much as 40% off the summer price. Tarifa-Tangier also has occasional discounts but they are less frequent, so you may end up paying twice the price you would in Algeciras (e.g. 40€ vs 20€ one way). Be sure to check both before buying tickets.

Many frequent foot travelers prefer taking the FRS fast ferry from Tarifa to Tangier city despite the higher fares. The FRS service is quick, simple, and relatively hassle-free compared to other companies, and use a fast hydrofoil ferry. Tarifa has easy foot access to the port and ferry docks. The regular fare for foot passengers is 67€ round-trip and 36€ for children between 3 and 12.

Some travelers prefer the Algeciras-Tangier Med route over Tarifa-Tangier because of the hassle they get from the local touts when leaving the Tangier city port. If Tangier city is your destination, however, you don’t really have much choice but you may want to arrive as early as possible to avoid much of the tout hassle.

Use the following tool to search for ferry fares with FRS (or another company) between either Tarifa or Algeciras and Tangier:

Ferry cancelations due to high winds in the Strait of Gibraltar

This is an important one you should know about when choosing between Tarifa or Algeciras to Tangier. As mentioned earlier, Tarifa is a very strong wind area, which results from its geographic position within the Strait of Gibraltar. Some days, the area gets winds above 40 knots – primarily in the spring and summer. When that happens, the port of Tarifa often closes down and all ferries get canceled.

This does not typically happen in Algeciras because 1) the winds are not nearly as strong as in Tarifa and, 2) the ships in Algeciras are much bigger and can withstand the rough seas caused by the high winds in the Strait of Gibraltar without issues.

Consequently, if you’re planning a trip to Morocco around spring or summer, be aware that you may not be able to sail back to Tarifa on a given day due to weather conditions. Whichever company you choose, however, if that happens you’ll have the option to return through Algeciras at no extra cost. However, this means you’ll have to get to Tangier Med by your own means, and from Algeciras to Tarifa once you land in Spain.

Traveling between ports in Spain and Morocco

As mentioned, there are situations when you may need to go from Tarifa to Algeciras (or vice-versa) or from Tangier to Tangier Med (or vice-versa). If you’re driving, transferring between Tarifa and Algeciras is an easy 20-minute drive along the small and scenic mountainous road running along the Strait of Gibraltar.

Alternatively, you can catch one of the frequent buses connecting Tarifa to Algeciras (several daily buses). Be aware you’ll then be facing a 30-minute walk from the bus station to the ferry terminal – you can also take a taxi.

On the Moroccan side, things are not as simple. As mentioned, Tanger and Tanger Med are about 50 km apart, and public transportation is scarce and complicated. There’s normally one train a day connecting Tangier city to Tangier Med, but information is hard to find including on the Moroccan national railroad site. Last time I checked, there was an 11:00 train leaving from Tangier Med, and an evening train from Tangier.

An easier way to move between Tangier city and Tangier Med is through “white taxi” (intercity taxis). The normal cost is about 250DH (20+€) but as a tourist, you’ll often have to haggle with the driver to obtain that price. Also be aware that White Taxis drive like madmen in cars that are often in frightening condition.

There are also very cheap public buses running along the highway but these are highly impractical for non-locals.

In short, if you can, it will be a much easier and cheaper option for you to transfer on the Spanish side (between Tarifa and Algeciras) rather than on the Moroccan side (Tangier-Tangier Med)

This post focused on helping your choose between Tarifa or Algeciras to Tangier. There are, however, other options, including Motril and Gibraltar on the European side, Ceuta and Melilla on the North African side. Most travelers, however, tend to go through either Tarifa or Algeciras unless they have specific reasons to choose otherwise. 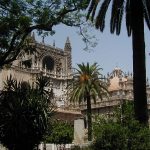 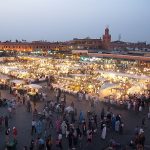