Nice Or Cannes: Which To Choose for 3-4 Days

Nice and Cannes are two of the star destinations of the French Riviera (Côte d’Azur). If you’re planning on visiting the coast for a few days, you’re probably wondering which of Nice or Cannes you would be better off staying in as your basecamp. The goal of this article is to help you make the right decision based on your preference.

Nice is a larger city with a long, high-traffic but beautiful beach promenade, a larger city center with lots of restaurants and cultural sights, and highly efficient transportation to all places along the Riviera coast and the backcountry.

Nice Or Cannes: what travelers say

Taxis in the area are very expensive, costing about 30 euros from the airport to Nice city center. Uber is a slightly more affordable option.

Public transportation is excellent along the coast with numerous and fast commuter trains. Nice is in the middle of transport links, with, in one direction, Biot, Antibes, Juan Le Pins, and Cannes, and in the other direction, Villefranche, Eze, Monaco, Menton, and Italy (Ventimiglia).

Cannes is at the West end of the transport link, but you can still travel all the way to Italy without additional changes or cost.

Nice has a great tram system to move around the city easily. Cannes is more compact so you can easily walk along the Croisette and inland to the bus station. The “Routiere” open-air bus starts near the old harbor at the end of the Croisette.

The Croisette is lined with beautiful historic hotels often seen in movies – you can freely enter the sumptuous lobbies and even access some of the bars for a nice drink. Other parts of cannes, though, have a more “normal” architecture.

Cannes has a small-town feel with its yacht harbor and tiny old town where you can find local food, cosmetics, souvenirs, and chic clothing. The Cannes port is also where you can catch a ferry to the pretty Lerins islands nearby.

There’s also a popular small shopping area across from the beach often referred to by Americans as “Rodeo Drive”.

Nice, on the other hand, provides a more urban experience with larger distances, diverse neighborhoods, larger and more frequent cultural events, and more choices for going out.

The tree-lined Promenade des Anglais is wide and beautiful and can be walked all the way to the Nice harbor. You’ll often see performing artists and activities along the promenade. Like Cannes, Nice also has its grand hotels with beautiful architecture and frequent live bands.

Entertainment activities also take place in the pedestrian streets of the old town, around Place Massena where the tram goes, and in the Cours Saleya which is quite lively at night.

Both Nice and Cannes get very touristy in the summer, making for a cosmopolitan feel. Nice, however, better retains its French vibe compared to Cannes, being a bigger city where people live.

Cannes has several nice sand beaches which are within short walking distance from town and hotels with free amenities, animation, and warm water. The beaches get very crowded in the summer.

In contrast, Nice’s urban beaches along the Promenade are covered with pebbles and so are much less attractive – expensive sun chairs are required for comfort.

Nice has some quality cultural sights to offer visitors, including the stunning Matisse and Chagall museums, the Fondation Maeght modern art museum in nearby Saint-Paul de Vence, and the Renoir Museum in Cagnes-sur-Mer (a half-hour train ride from Nice).

See this other post for more details about Nice’s cultural sights.

From Cannes, you can quickly access the Picasso museum located in Antibes. Cannes itself has the majestic Palais des Festivals to show off, an imposing construction home to the world-famous Cannes Film Festival and the Allée des Etoiles red-carpeted walk of fame.

The Cannes Yachting Festival every year allows visitors to admire at some of the trendiest and costliest luxury Yachts in the world.

Cannes also has the Centre d’Art la Malmaison, an art gallery and museum boasting some great exhibitions, the impressive 19th Century town hall with views out to the port, the Notre Dame d’Espérance 14th-15th century church and surrounding historical neighborhood.

Other sights include he authentic, pastel-colored le Suquet neighborhood, and the 200-acre Croix-des-Gardes park with its pleasant paths and 19th Century castle and garden areas.

As mentioned, Cannes has several urban beaches with fine sand great for sunbathing and swimming. Palm Beach and Plage du Midi are the most popular and closest to the town center.

Nice, on the other hand, only has pebble-covered beaches lining the Promenade des Anglais. Although the sea view is stunning, you really need to wear shoes for walking on the stones, and you generally have to rent a lounge chair if you want to get some sun with any comfort.

If staying in Nice, an alternative is to take the short train ride to Antibes and Juan-les-pins, about midway between Nice and Cannes, where you’ll find nice sand beaches to relax on.

Examples of places to eat include the Safari on the Cours Saleya, where you can watch people go by, the Comptoir du Marché, or the Atelier du Port.

Unlike Nice, most of the restaurants in Cannes are situated along the La Croisette promenade, thus typically offering stunning ocean views. The port area also has many good small pizza places.

In the streets parallel to the promenade, by the Casino, you can also find some really good seafood places with small terraces to sit outside.

Most places get crowded with diners quite late around 10 or 11 pm. Le Cannet, further from the seafront, is another nice area to have lunch in.

A lot of the nightlife in Cannes takes place close to the beaches and in the old town around the old port. There are quite a few good places for drinks around there including English and Irish pubs such as Ma Nolans, Morrisons, and the Quays. You can also have a cocktail in one of the luxury hotel bars around the port.

Cannes has a lot of stores for shopping along the Rue d’Antibes. As mentioned earlier, these are mainly high-priced designer shops, which is why visitors commonly compare that area to Rodeo Drive, a similar luxury shopping street in Beverly Hills.

You can find more “normal” stores as you walk further away from the seafront. Near the railway station is also a street market where you can buy less overpriced clothes and handicrafts.

Generally speaking, staying in Nice is cheaper than Cannes (or Monaco). Nice has a broad range of accommodations to offer, ranging from affordable to luxury. Staying in the Carré d’Or district adjacent to the old town is a great option as you’ll be a short walk (or a quick tram ride) to the beach, the old town, and the train station.

Travelers often mention Le Meridien hotel which has an excellent location right at the beach and close to the Old Town. The rooms with sea view are quiet despite the heavy traffic on the Promenade.

Younger people enjoy the Windsor in the Carré d’Or area. La Pérouse is considered an excellent hotel with a Provençal style, offering large rooms with terraces and amazing views. The Negresco is among the most iconic (and expensive) hotels in the world.

Some visitors prefer to stay in the many B&Bs and hotels outside of Nice which provide a great base for venturing into the countryside, hills, and mountains.

Cannes also has a great choice of accommodations. Places in the central “Banane” town center (banana shaped) are conveniently close to the beaches, stores, nightlife, and transportation. Travelers often mention the Azurene Royal Hotel, very close to the beach, and the hotel Splendid.

More upscale options include the Majestic, near the Croisette, and the Grey d’Albion, a bit further away from the beach. The iconic Carlton is located right on the busy Croisette.

Alternative options include the scenic Esterel coast (West of Cannes) including Theoule-sur-Mer, renting a house in Le Cannet above the town, or staying in beautiful Cap d’Antibes or in Cap Ferrat.

There are many day trips to make from either Nice or Cannes. In Cannes, you can easily walk to the train and bus station, whereas in Nice you may have to walk or take the tram.

From Nice, you can be in Monaco in 20 minutes by train, and in Cannes in 35 minutes. In between, you can make stops in Villefranche, Antibes, and Menton. You can visit the Saint-jean-Cap-Ferrat peninsula and the magnificent Villa Ephrussi de Rothschild. You can also catch buses to hill towns such as Vence and Eze.

In Nice, you can also rent a car to visit the beautiful backcountry (e.g the Gorges du Loup) or drive to Roquebrune-Cap-Martin near Monaco.

From Cannes, you can take a day trip to the Iles de Lerins islands. You can also take a quick drive or train ride to the Esterel Coast, a small mountain with scenic walks and uncrowded coves.

From both Nice or Cannes, you can drive inland to Moustiers-Ste-Marie and visit the Gorges of Verdon or to the beautiful Provence region. 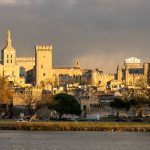